This has been an unbelievable heatwave!  So Bill decided to keep the summer theme and bring to you original songs from some of our outstanding concerts. 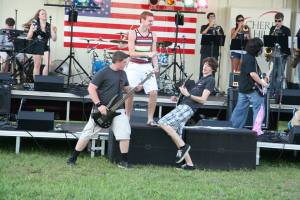 This week’s show brings us to the Medford Fireworks where we recorded a fantastic show with No Commitment.  It will feature one of the original songs out of many they performed that evening.

Going back to last year’s anniversary show, we have an original from Dr. Lou and the Privileged Few.  You’ll be seeing more of them in the next few weeks since we just taped them this past week at the “Rock Out Hunger” food drive in Burlington Twp.

Then onto last year at Hollystock.  The Genies sounded incredible under a tarp in the pouring rain.  The rain had shorted out the PA system, but they didn’t let that stop them.  And I am so glad I braved the rain to catch their performance!

Last year at Florence’s July 4th Celebration we caught Tommy Conwell, backed up by Throddle, performing for a very eager audience.  A day of 100 degree heat and then a thunderstorm, but his fans waited through all that to catch the terrific show he gave them that evening.

We have an encore presentation of Bill & Friends from this year’s Croft Farm Rockfest ’13.  He just likes to remind everyone “Do not drink & drive!”

Our July 27 show will include all-new footage from recent events!

Two events coming up this Sunday and next Saturday:

For our country music fans, you can enjoy our producer Bill singing harmonies and playing the keys with The Trump Boyz, Sunday, July 21, 7:00 – 8:30 PM at Hainesport Concert in the Park, Marne Highway, 1 Hainesport Center, Hainesport, NJ., next to the Muncipal Bldg., in the Gazebo.  Bring a blanket or lawn chairs and enjoy the great music and the beautiful park.

Our new sponsor, Woodstock Trading Company, is hosting an Incense Lecture on July 26th and an Artisan Craft Show on July 27th, with music by Cover This Band.  Stop on by and check out all the great merchandise they have to offer!

More upcoming events in next week’s blast, which will include the August date for Dr. Lou’s concert at Burlington Center Mall.

Hope everyone can keep cool and enjoy this week’s show!

Expert audio, video, podcast production, and original music. Our pricing is competitive — call for an estimate!

Get your band on TV!

View our show archives on YouTube! Subscribe to our updates and you'll be notified every time we add a show to the archives.

21-Year History of Productions Such As:

Our website and social media accounts are maintained by Barb at FranciscanMom.com. Barb specializes in online and print writing and editing as well as social media. Contact her at barb@franciscanmom.com.

All rights reserved. All content is the property of Room Two Productions. We’d love you to share this content with your friends–but please link it back to us!